The COVID-19 pandemic forced us to rethink our ways of doing and acting in the world to face particularly serious challenges to our health. One of those challenges implies urgently addressing the disconnect between the fair and sustainable production, consumption, and commercialization of foods that contribute to the Mexican population’s quality of life. This, in turn, is exacerbated by the absence of national public policies to manage the continuity of food producing communities, and instead prioritizing intensive agriculture and livestock farming systems, which are becoming increasingly vulnerable.

In light of these complexities, two participatory creative projects have emerged. They share an interest in creating resilient food practices, although their methods amid this social crisis are different. On one hand is Casa Gallina, located in the Santa María la Ribera district of Mexico City, and on the other, Colaboratory Kitchen (Cocina Colaboratorio) that co-designs pilot projects in three contrasting communities: Loma Bonita in the Lacandon Jungle, Chiapas; Santo Domingo Tomaltepec, in Oaxaca; and the Xochimilco lake area to the south of the Mexican capital. Their participatory, transdisciplinary, and collaborative artistic practices allow us to consider our relationship with food though narratives that transcend its nutritional role. In other words, the narratives touch on broader spheres of meaning that offer a different perspective of how food systems work, and are sustained by the very people involved through collective, community, and collaborative organization, building on the practice of finding answers or “solutions” to conditions they control.

It is not my intention to comprehend the processes these collectives enable as “a world away,” or as a peculiarity derived solely from the current social crisis, but rather as a means of understanding an increasingly necessary way “to be in / inhabit the world.”

Also included here are several low-cost, nutrient-dense recipes, made with local and seasonal ingredients. They arose from the need to create new flavors and encourage consumption of healthy, nutritious foods in order to boost the immune system and improve digestion—pillars of wellbeing.

Foods pass from the fields to the table on their complex journey through the food system. The path invariably brings them to a stop in the kitchen, a space where ingredients are transformed into meals. The kitchen is also a vital space for connecting with other living beings such as herbs, fruit, vegetables, and animals, becoming a bridging space between biodiversity and dietary diversity. A kitchen also implies a community of people that prepare and eat the meals produced, form opinions, and enter into dialogue about them. It creates a space for nostalgia, making stories visible, and recreating memories by evoking flavors, smells, textures, and ingredients. These processes can even be a way of demonstrating care and tangible affection, as well as being a space for collective enunciation and political action for change and social transformation.

For both Casa Gallina and Colaboratory Kitchen, the kitchen is an actional space for establishing exchanges of know-how, knowledge, experiences, and dialogue for the common good. For this reason, I would like to emphasize that their practices can be replicated in other, similar communities, and thus contribute to the expansion of socio-environmental artistic projects.

Casa Gallina was the last edition of inSite, a binational art festival held in the 90s in the cities of Tijuana and San Diego. The project started in 2013, and its first cycle finished at the end of 2018. During those five years, its programs and platforms focused on creating experiences to activate public knowledge in the district of Santa María la Ribera (Mexico City). Several exchange experiences were designed and implemented in conjunction with the residents using three curating platforms—Coparticipaciones (Joint Participations), Saberes (Knowledge), and Sinergias (Synergies). In these, professionals, artists, and other cultural agents interacted with the varying organizations and people of the district. Casa Gallina is still in operation today, but is no longer associated with the inSite festival.

One of its cornerstone projects was Cocina Abierta (Open Kitchen), 2017, to which 14 owners of family restaurants established in the area covered were invited. In a series of cooking workshops, they were able to interact with some of the best-known chefs in Mexico about how to prepare different dishes. In addition, the project offered access to commercial fair-trade services similar to those managed by various store chains to small-scale entrepreneurs producing locally made goods and services.

Three strategies enhance the way this system functions: 1) Organized shared work and mutual support following a horizontal organization scheme, building a solidary network of businesspeople and consumers in the district; 2) Self-activity directed at a revaluation of localness as added value to the goods or services offered, and; 3) A commitment to consuming what the network produces and producing what the network consumes.

The commercial undertakings organized under Casa Gallina’s management ascribe to a solidarity economy that promotes fair trade and responsible and sustainable production and consumption (‘prosumption’). This all occurs within a network where the nodes are shops and restaurants serving as the axes of local development, and where locality is the cells of the economic and social organism.

Workshops like the one mentioned above provide an excellent opportunity for critical reflection and collective action regarding daily practices that relate not only to the culture and creativity inherent in the culinary arts, but that also, principally, attend to the importance of reframing eating and consumer habits. They also value the established social rituals and political and financial implications of food.

The Colaboratory Kitchen project brings communities of farmers and producers, academics, creative minds, and chefs together around the kitchen table to take action to create more sustainable, fair, and resilient futures. It is a creative, educational, and research laboratory to reconcile the conservation and restoration of the landscape with food production. The basis for this is a reconfiguring of biocultural and common knowledge in order to strengthen the resilience of rural and peri-urban communities. The aspirations and actions begin in the kitchen using various activities addressing specific contexts to combine visions, knowledge, practices, and products. In this sense, the kitchen is a co-creative space where connections arise through cooking, tasting and trying, growth, experimentation, and sharing.

The Project began in 2016 as a collaboration between an international collective of artists based in Amsterdam (Cascoland) and an international research project comprising the UNAM, Wageningen University, and Ecosur. They combined efforts to design spaces and tools for communication and action for the socio-ecological empowerment of the southern Lacandon Jungle in Chiapas. In 2020, the program extended to two other communities: Xochimilco, and Santo Domingo Tomaltepec (the Central Valleys, Oaxaca). It continues to strive to involve a growing group of local producers and their families, creative minds, researchers, teachers, and students from varying institutes and faculties of the 3 UNAM subsystems linked to the different locations addressed.

Their Living Biocultural Archive, winner of second place in the William Bullock Special Lecture Series on Critical Museology, is a device for storing information, know-how, knowledge, practices, and experiences related to the biocultural heritage of the abovementioned communities. The scheme aims to collectively co-create, along with the inhabitants of each community, a seed, recipe, story, object, and local landscape archive that the inhabitants integrate into their social life as a manifestation of their vision of the world. The archives developed are co-created from, in, and for each specific location, but also serve as devices to strategically connect the three communities involved. In this way, the aim is to promote exchanges of know-how and knowledge as a community resilience practice. The Living Biocultural Archive creates new spaces for coexistence and exchange during the health crisis in the face of a key issue for socio-environmental resilience. 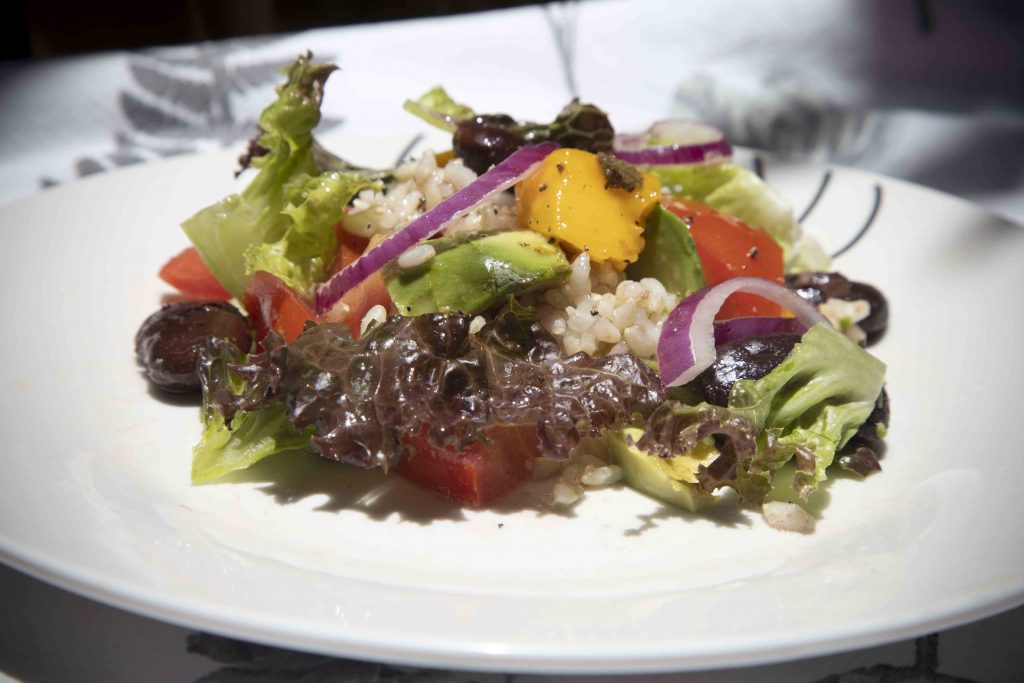 Juice of ½ a grapefruit

For the vinaigrette: Mix the olive oil, grapefruit juice, apple vinegar, and the honey; add salt and pepper to taste. Blend well to emulsify and add to the salad. Serve immediately. 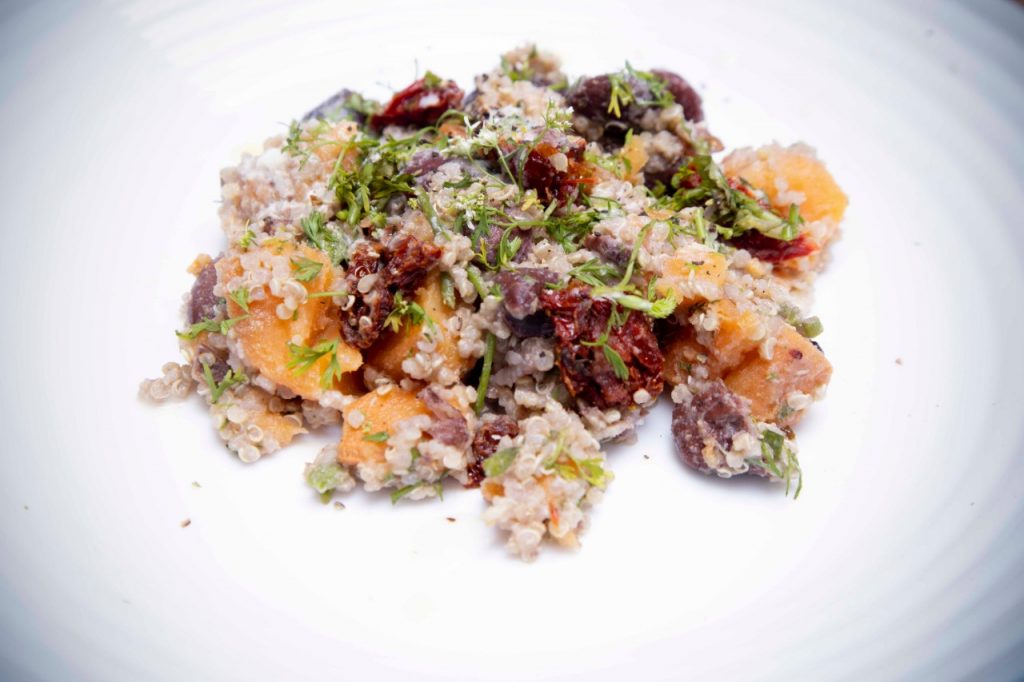 For the vinaigrette: Blend two tablespoons tahini with the lemon juice, half a teaspoon cumin, the clove of garlic, and one tablespoon olive oil (optional). Add to the salad, and serve immediately. 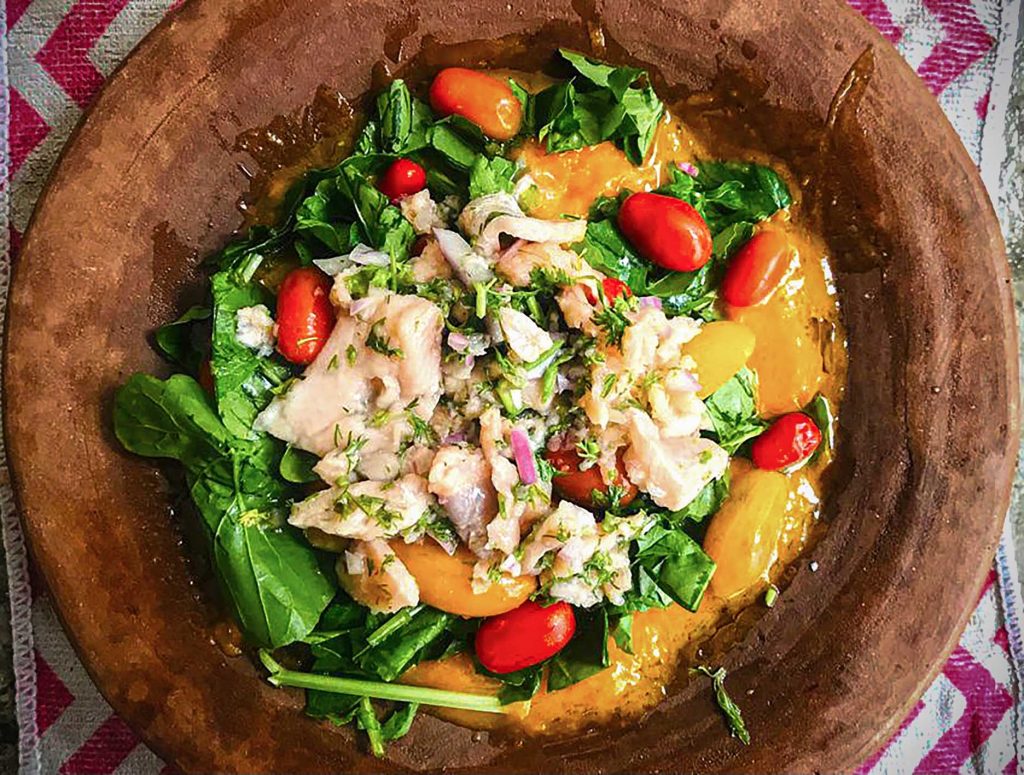 Serve immediately accompanied with corn tostadas or the cracker of your choice.

An anthropologist and cultural manager, Cadena specializes in subjects of cultural policy and art theory. Their area of research relates to conflicts and appropriations of public space, and the new social groups emerging throughout Mexico as a result of the relationships between art, cultural policies, and society.

Cadena holds master’s and bachelor’s degrees in Social Anthropology from the Center for Research and Advanced Studies in Social Anthropology, and the Metropolitan Autonomous University, or UAM, Mexico City, respectively, with a specialty in Cultural Policies and Cultural Management from the UAM / Organization of Ibero-American States / National Center for the Arts. They hold diploma certifications in Art Theory and Curatorial Management (17, Institute for Critical Study), and Sustainable Tourism Management (University of Peru), and studied the following graduate courses: a master’s degree in ‘Cultural diversity: anthropological perspectives’ (Complutense University of Madrid), and a postgraduate qualification in Media Arts (the National University of Córdoba, Argentina; the University of Chile, Chile; and the University of Caldas, Colombia). They are a Doctor of Art and Design from the Faculty of Arts and Design of the National Autonomous University of Mexico.